Mental health awareness, not dismissing concerns the first steps in helping loved ones with suicidal thoughts

SINGAPORE: Awareness of the warning signs and not dismissing concerns are the first steps in helping someone who might have suicidal thoughts, experts have told CNA.

“There is much guilt and shame when talking about one’s own suicidal thoughts, and this often deters those who are experiencing them from talking about it and seeking help,” said Dr Ganesh Kudva, associate consultant at the department of psychosis at the Institute of Mental Health.

Everyone has a role to play, he added, but there is a need to be more aware about mental illness and suicide.

The comments come after figures released by the IMH earlier this month showed that one in 13 adults in Singapore has thought about suicide.

The study on suicidality – a term encompassing suicide thoughts, plans and attempts – is part of the second Singapore Mental Health Study.

Last year, 452 people in Singapore killed themselves. A total of 2,795 suicide attempts in Singapore were recorded in 2020, according to a written parliamentary answer by Health Minister Ong Ye Kung in July. 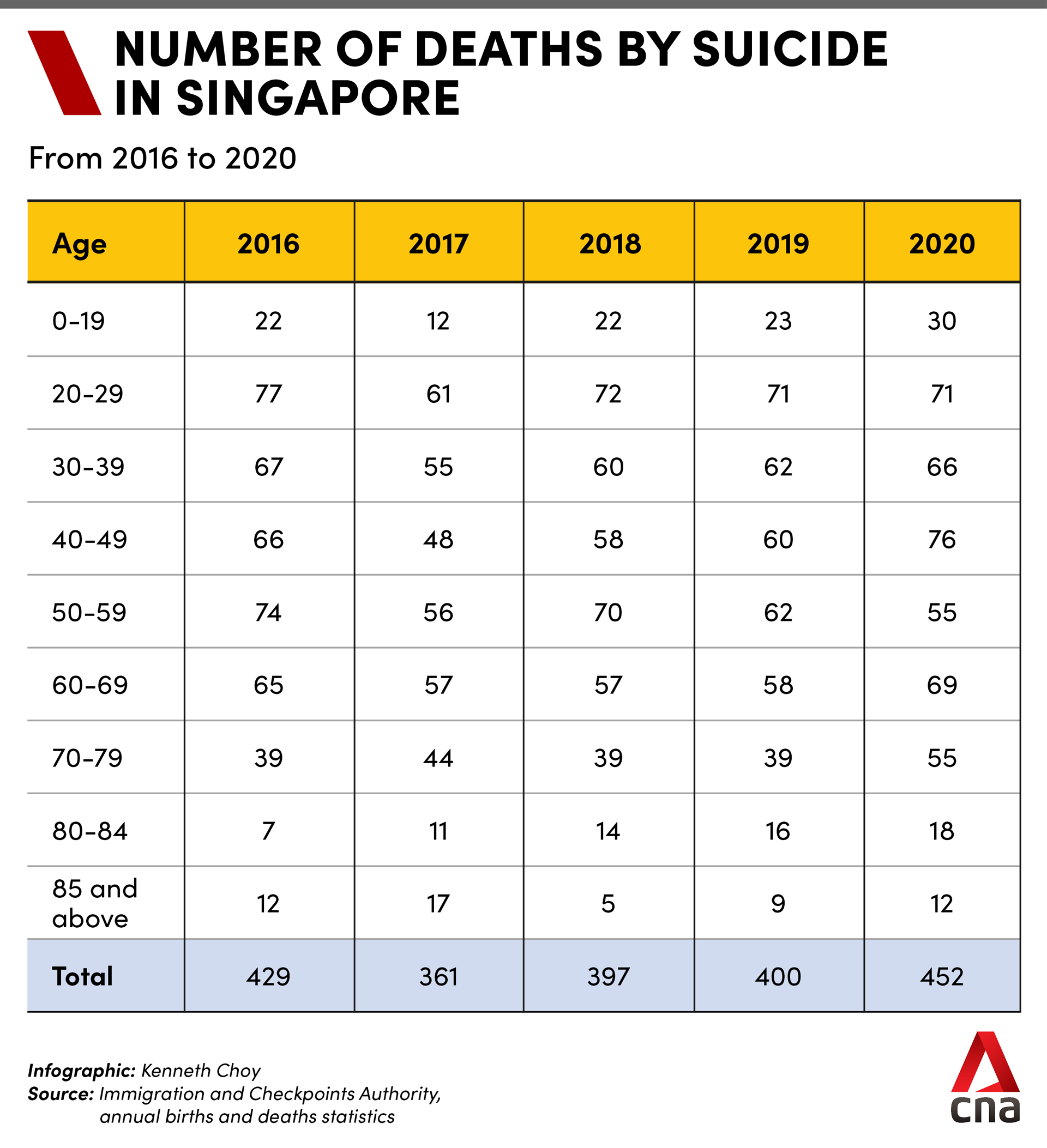 Mr Gasper Tan, chief executive of the Samaritans of Singapore, said: “It is important for more in the community to be equipped with the literacy of identifying signs of distress or crisis to be able to intervene early.”

CNA spoke to experts about looking out for the warning signs, what you can do, and why talking about the issue has benefits:

Commentary: Heeding cries for help – getting to the heart of elderly suicides requires more than counselling

“Suicidal ideation can vary from fleeting and unwanted thoughts to a preoccupation with death,” she added.

The first step is identification of the “symptoms”, said Dr Kudva. It is important not to brush off mental health distress and suicidal ideation as being a symptom of weakness or a matter of choice.

Identifying these symptoms as being genuine expressions of problems is a “key step” to helping someone in distress. These symptoms, if unaddressed, can lead to serious consequences, such as suicide, he explained.

While the warning signs can vary from person to person, “in essence” it tends to be a “marked deviation” from the person’s usual behaviour, said Dr Kudva.

Some of these signs include a person becoming withdrawn, appearing sad and tearful, or describing themselves of being devoid of hope or being a burden.

They might be “preparing for an impending demise and saying farewell to family and friends”, or they might speak of death or express a desire to die. In some instances, people self harm.

There might also be sudden changes in moods, emotional outbursts, and a loss of interest in their usual day to day activities, explained Mr Tan.

Some risk factors of suicide include prior attempts, a mental health condition, or social isolation, he added.

“When dealing with suicidal thoughts, one often faces a lot of psychological pain. Prolonged and intensified sense of pain can contribute to feelings of hopelessness and helplessness,” said Mr Tan.

“By reaching out and doing regular check-ins on the people we care about, lending them a listening ear, and encouraging them to seek help and prompt interventions, where necessary, we can help to alleviate stress and reduce suicidality,” Dr Kudva added.

WHAT CAN I DO?

When support is provided early, recovery can be less challenging, and escalation may be prevented, said Mr Tan. This includes building a safety plan and having a good support network.

“If someone displays warning signs or shares about their thoughts of suicide, we may get startled or react emotionally,” he explained.

During that time, it is important to remain non-judgemental and show genuine concern. It can also mean providing support, such as a listening ear. Provide them with a safe space to share their thoughts and feelings, Mr Tan said.

“To know whether they are suicidal, ask directly if they are experiencing any suicidal thoughts and thinking of ending their life,” added Mr Tan.

“Often people worry that asking such sensitive questions may make them feel worse. On the contrary, research shows that asking directly can reassure the person in distress that you are ready to have the difficult conversation with them and may be able to provide the much-needed support.”

Dr Kudva added: “Psychological first aid, which assists those during an emotional crisis, can be administered to someone who is distressed and potentially suicidal, to calm them down, while getting them to a place of health.”

Periodically checking for suicide thoughts among those with mental and certain physical illnesses may also mitigate against this risk.

Dr Kudva urged people to be aware about the avenues of help that can be sought.

These include mental health hotlines, the nearest A&E department for immediate medical attention, as well as family service centres and primary care doctors who are trained to manage mental health conditions.

You can also find a list of international helplines here. If someone you know is at immediate risk, call 24-hour emergency medical services.

Understanding suicide: Debunking myths and knowing what you can do

This is a belief that talking about suicide increases a person’s risk of suicide, but studies have shown that this is not true, said Dr Kudva.

It is key to work to “dispel the myths that surround suicide” – by acknowledging that it is not a rare occurrence, and that talking about it does not lead to someone becoming suicidal, he added.

“Sharing stories of those who once had suicidal thoughts, who sought help and are now better, is crucial to instilling hope among those who are presently suffering from such thoughts,” he explained.

“This is especially important as hopelessness is viewed as an important risk factor for suicide. The key message is that suicidal ideation is common, it is not something to be ashamed about, it is transient, and that help is available.”

Figures from the study showed that suicide ideation was 3.6 times more likely among people in the 18 to 34 age group compared to people aged 65 and above.

This “association of suicidality” with younger age is “notable”, said Dr Kudva, adding that suicide is the leading cause of death among those aged 10 to 29 in Singapore.

There must be an acknowledgement “at the societal level” that mental health issues are common and that it is not a taboo subject, he noted.

Both Dr Kudva and Mr Tan agree that mental health education in schools is important, as are community campaigns.

“Mental health literacy will improve once we start having an open conversation about mental health, and I believe that we are beginning to have this conversation is Singapore. This is certainly a step in the right direction,” Dr Kudva said.

Mr Tan said that while that has been increased understanding on mental health related topics, there are still many who have “inaccurate beliefs about mental health” or judge those who have a mental health condition.

“Conversations need to start by first debunking myths as well as starting to talk about suicide openly,” he added.

WHAT THE STUDY LOOKED AT

The study on suicidality was derived from the second Singapore Mental Health Survey. It involved face-to-face interviews, conducted between 2016 and 2018, with 6,126 participants aged 18 years and above.

“To establish the prevalence of suicidality, the study used the ‘Suicidality’ module of the World Health Organization Composite International Diagnostic Interview,” explained IMH.

Participants were asked a series of questions to determine if they had ever seriously thought about suicide, made a plan or attempted suicide.

The results showed there are socio-demographic reasons and illness-related risk factors for suicidality.

“While in general and in our study, the majority of individuals with suicidal ideation do not go on to make suicide attempts, it is nevertheless a risk factor for suicide attempts,” said Dr Mythily.

“We also know that previous suicide attempts are an important risk factor for suicides, and may result in subsequent attempts and even death, if not addressed adequately.

“The identification of risk factors of suicidality thus provides an opportunity to intervene early thereby lowering the risk of suicides in the population.”