SINGAPORE: Singapore reported 2,470 new COVID-19 cases as of noon on Monday (Nov 1) as 14 more people died from complications due to the coronavirus.

The fatalities were aged between 56 and 95. All of them, except for an unvaccinated individual, had various underlying medical conditions. The Ministry of Health (MOH) did not specify what these conditions were.

This brings Singapore's death toll from the coronavirus to 421.

Of the new cases reported on Monday, 2,467 infections were locally transmitted, comprising 2,189 in the community and 278 in migrant workers' dormitories.

Three were imported cases, MOH said in its daily update released to the media at about 10.50pm.

The weekly infection growth rate was 1.05 as of Monday. This refers to the ratio of community cases for the past week over the week before.

As of Monday, Singapore has reported a total of 200,844 COVID-19 cases since the start of the pandemic.

A total of 1,717 cases are currently warded in hospital, with 288 patients requiring oxygen supplementation in general wards.

Another 67 cases are unstable and under close monitoring in the intensive care unit (ICU), while 62 are critically ill and intubated. The current overall ICU utilisation rate is 67.1 per cent.

Of the 94,376 cases over the last 28 days, 98.7 per cent had mild symptoms or were asymptomatic, while 0.8 per cent required oxygen supplementation in the general ward, 0.3 per cent were in the ICU and 0.2 per cent died.

Over the past seven days, the number of fully vaccinated people who were critically ill in the ICU was 0.5 per 100,000 population, while that of non-fully vaccinated cases was 4.5. 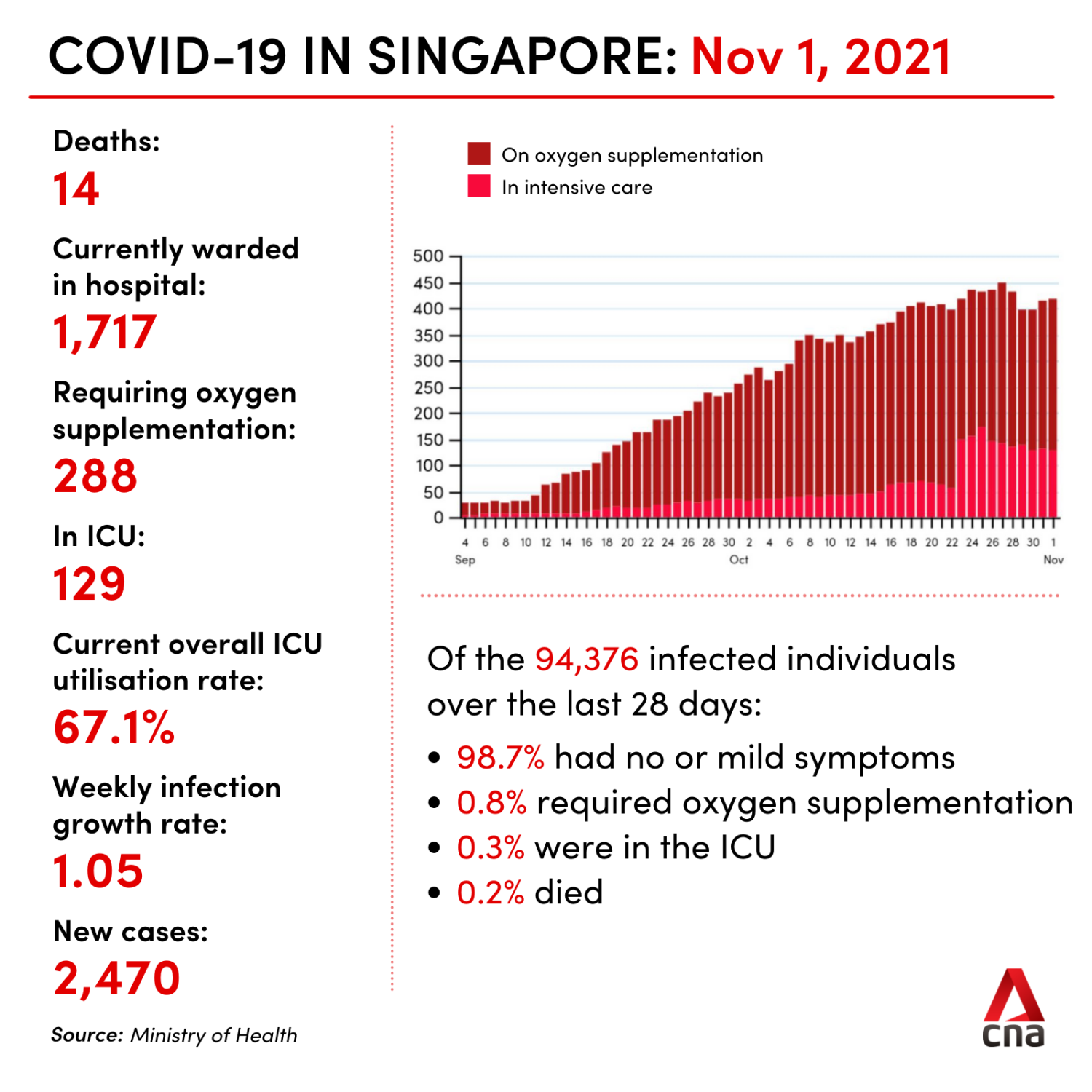 MOH said it is closely monitoring six large clusters including the Institute of Mental Health (IMH). There are now 278 cases linked to IMH, comprising 16 staff members and 262 patients.

Seven more infections were added to a cluster at Jamiyah Home for the Aged (Tampines). That cluster has grown to 44 cases, comprising five staff members and 39 residents.

There are now 160 COVID-19 cases at Bukit Batok Home for the Aged.

The Health Ministry will expand Singapore's ICU capacity further, in preparation for a potential rise in severe cases, Senior Minister of State for Health Janil Puthucheary said in Parliament on Monday.

“We are currently working with our hospitals to ramp up from 219 to 280 ICU beds for COVID-19 patients. These can be ready this week, if needed,” he said.

Dr Puthucheary said that the next expansion will be to 350 beds, adding that the Health Ministry has been repurposing existing hospital wards, such as single rooms and isolation rooms, into additional ICU beds.

"We are also asking the private hospitals to set aside ICU beds to assist in managing both COVID-19 and non-COVID-19 patients who are critically ill," he said.

Resignation rates among healthcare workers in Singapore up this year; MOH to increase ICU capacity