SINGAPORE: Singapore reported 3,397 new COVID-19 cases as of noon on Tuesday (Nov 9) as 12 more people died from complications due to the coronavirus.

The fatalities were aged between 58 and 95. All of them, except for an unvaccinated individual, had various underlying medical conditions. The Ministry of Health (MOH) did not specify what these conditions were.

This brings Singapore’s death toll to 523. 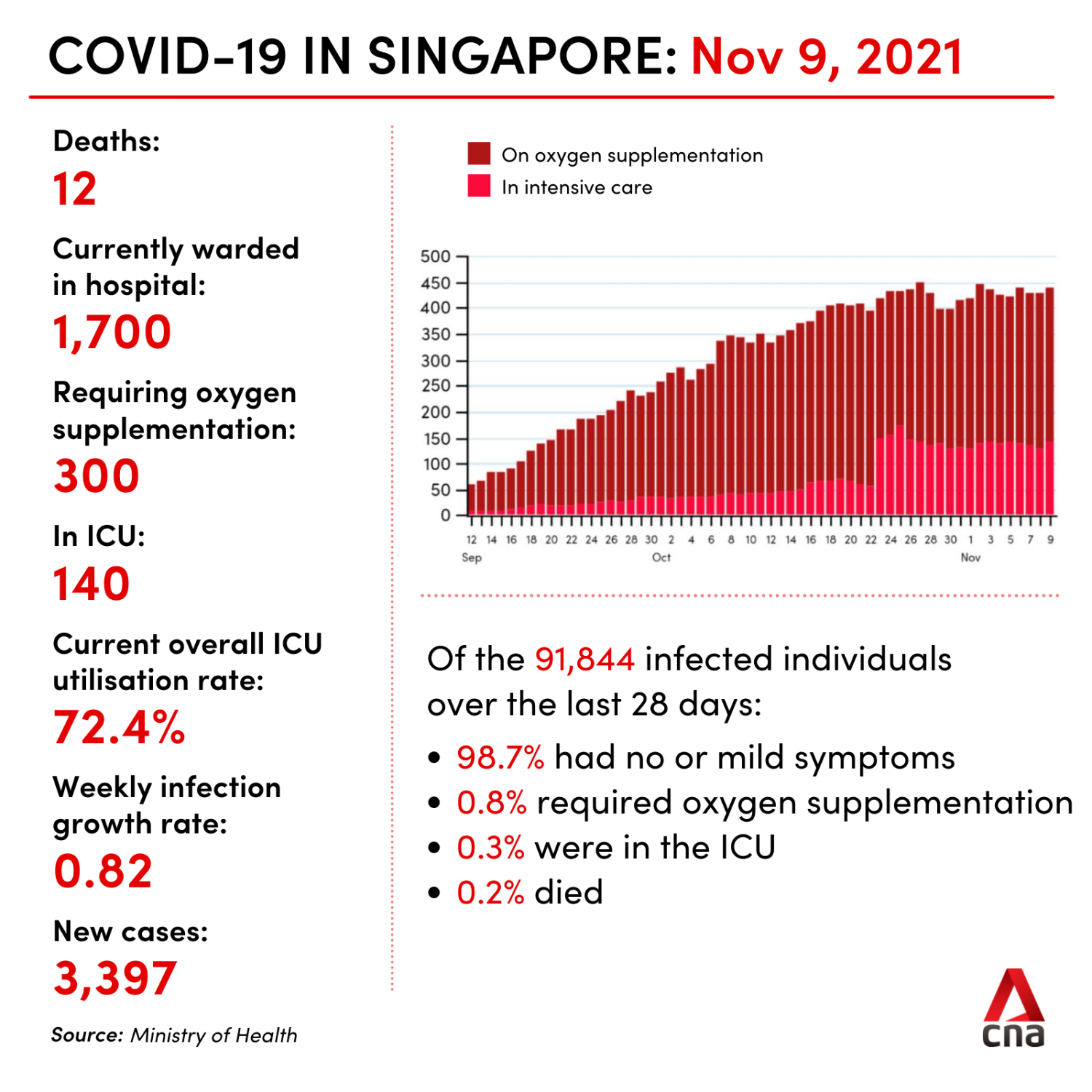 The weekly infection growth rate was 0.82 as of Tuesday, lower than the 0.84 reported on Monday. This refers to the ratio of community cases for the past week over the week before.

This was the seventh consecutive day the weekly infection growth rate has remained below 1.

Of the new cases reported on Tuesday, 3,391 infections were locally transmitted, comprising 3,222 in the community and 169 in migrant workers' dormitories.

There were six imported cases, MOH said in its daily update released to the media at about 11.15pm.

As of Tuesday, Singapore has reported 224,200 COVID-19 cases since the start of the pandemic.

A total of 1,700 cases were warded in hospital, with 300 patients requiring oxygen supplementation in general wards.

Sixty-eight cases were unstable and under close monitoring in the intensive care unit (ICU), and 72 were critically ill and intubated. The current overall ICU utilisation rate was 72.4 per cent.

Of the 91,844 cases over the last 28 days, 98.7 per cent had mild symptoms or were asymptomatic, while 0.8 per cent required oxygen supplementation in the general ward, 0.3 per cent were in the ICU and 0.2 per cent died.

As of Monday, 85 per cent of Singapore’s population have completed their full regimen or received two doses of COVID-19 vaccines.

This includes the cluster at the Institute of Mental Health, which reported seven new cases on Tuesday, bringing its total to 404 cases. Of these, 27 are staff members and 377 are patients.

Another case was also reported at Acacia Home, which now has 45 cases.

EASING OF SOME MEASURES

From Wednesday, fully vaccinated members of the same household will be allowed to dine out together in groups of five, co-chair of the multi-ministry task force Gan Kim Yong said on Monday.

The easing of dining-out restrictions will not apply to those from different households, where the cap remains at two fully vaccinated people, said MOH on Monday.

The eased restrictions also do not apply to hawker centres and coffee shops, as F&B outlets must be able to administer "comprehensive" vaccination checks.

The ministry also announced on Monday that from Dec 8, all COVID-19 patients who are unvaccinated "by choice" will have to pay their own medical bills if they are admitted to hospitals or COVID-19 treatment facilities.

"Currently, unvaccinated persons make up a sizeable majority of those who require intensive inpatient care, and disproportionately contribute to the strain on our healthcare resources," said MOH.

People who are ineligible for vaccination, including children under 12 years old or medically ineligible patients, will still have their COVID-19 medical bills fully paid for by the Government, the Health Ministry added.

COVID-19 patients who are unvaccinated by choice may still tap on regular healthcare financing arrangements to pay for their bills where applicable.

Vaccination-differentiated measures to be expanded, starting with visits and activities at residential care homes