“LISTEN TO YOUR VOICE”:
A SONGWRITER’S STORY

GROUP OF YOUNG MUSICIANS sit facing each other in an irregularly-shaped circle. A flurry of notes, some off-key, fill the dimly-lit space as they begin tuning their instruments. A cello. A Malay folk accordion. Then a Chinese pipa. ACuban conga. And an Indian veena.

It is an unusual sight, and a just as unusual sound.

The Open Score Project is a young ensemble venturing into a musical no-man’s land in Singapore. Its co-founder, composer Syafiqah ‘Adha Sallehin, 28, is trying to produce a unique sound by combining ethnic instruments with contemporary arrangements. “I want to create a new type of music and experiment with different possibilities,” said Syafiqah. “It‘s really about going beyond what we’re usually comfortable with.”

The group begins practising and something magical begins to unfold. 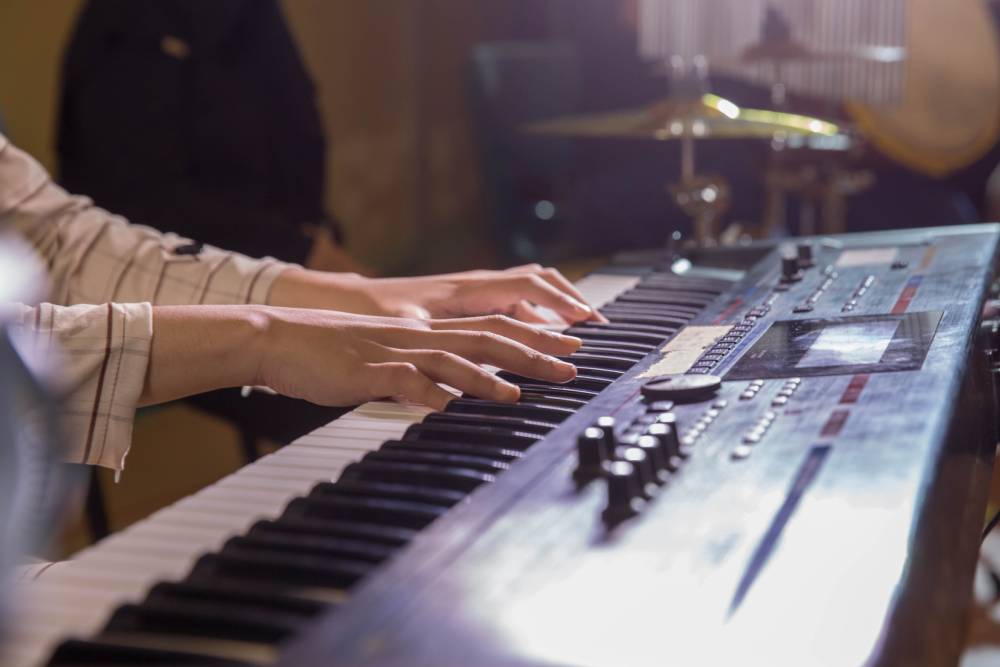 THE PIPA OPENS WITH ENERGETIC TRILLS. Soon after, steady thumps of the conga kick in. The accordion joins the group, adding a reedy finish to the music. The melodic veena follows before the cello sweeps in to ground the piece with its powerful but mellow voice. In an instant, the curious collection of instruments come together to produce a truly unique sound.

It is a bold sound. While local audiences are familiar with different ethnic instruments and musical styles – Malay, Indian and Chinese – they are more accustomed to listening to each separately. “It hasn’t been easy,” said Syafiqah “But I have a message – there is beauty in combining diversity – and I want to put this out there.”

SYAFIQAH SHOWED MUSICAL PROMISE SINCE YOUNG . Her father remembers the first song he heard her play on an electronic keyboard at home. Syafiqah was only four years old then. “With just one little finger, she played ‘Where do I begin‘,” recounted her father, Mohamed Sallehin. “I was amazed and asked her, ‘Do you want to learn to play the piano?’ She smiled.” It was a particularly apt choice of song for little Syafiqah – it marked the beginning of her lifelong journey in music.

Money was tight for the family of six living off her father’s single income. To pay for Syafiqah’s piano lessons, he took on a second job moonlighting as a driver. The work was tough and when her piano teacher told him students tended to drop out when they reached Primary 5, he was secretly relieved, thinking it was a matter of time. “I was so surprised that she stuck with it all through secondary school,” said Mohamed Sallehin. “Growing up, she has always been very persistent.” 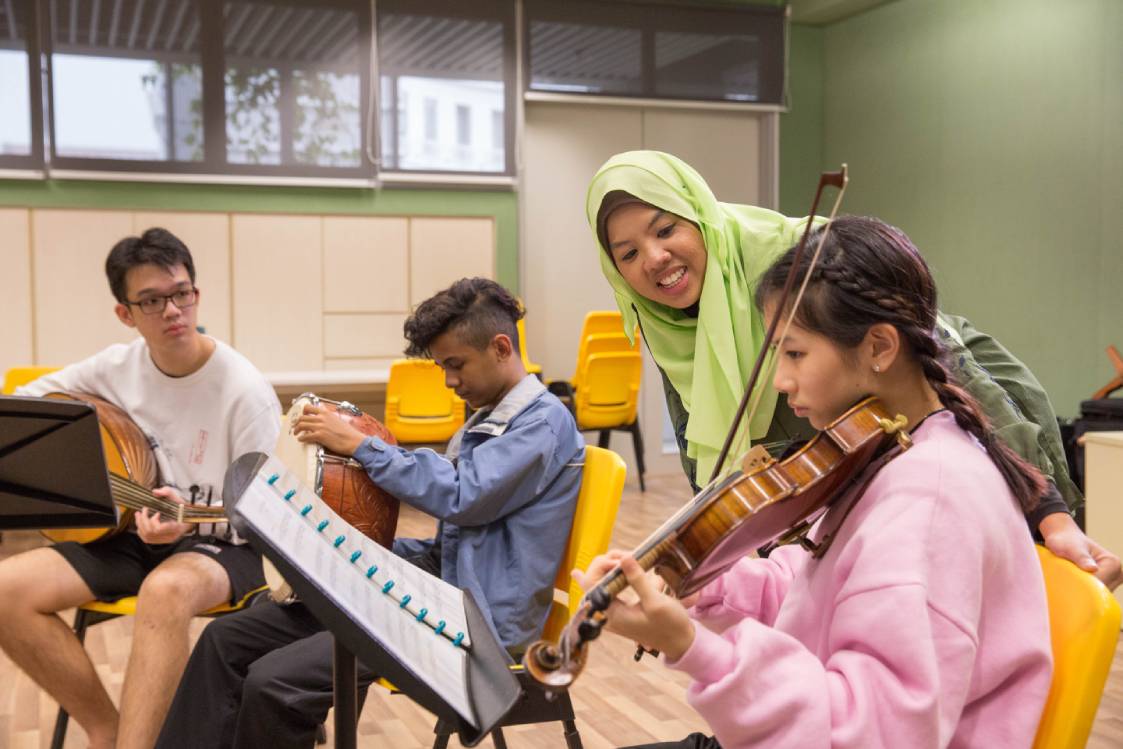 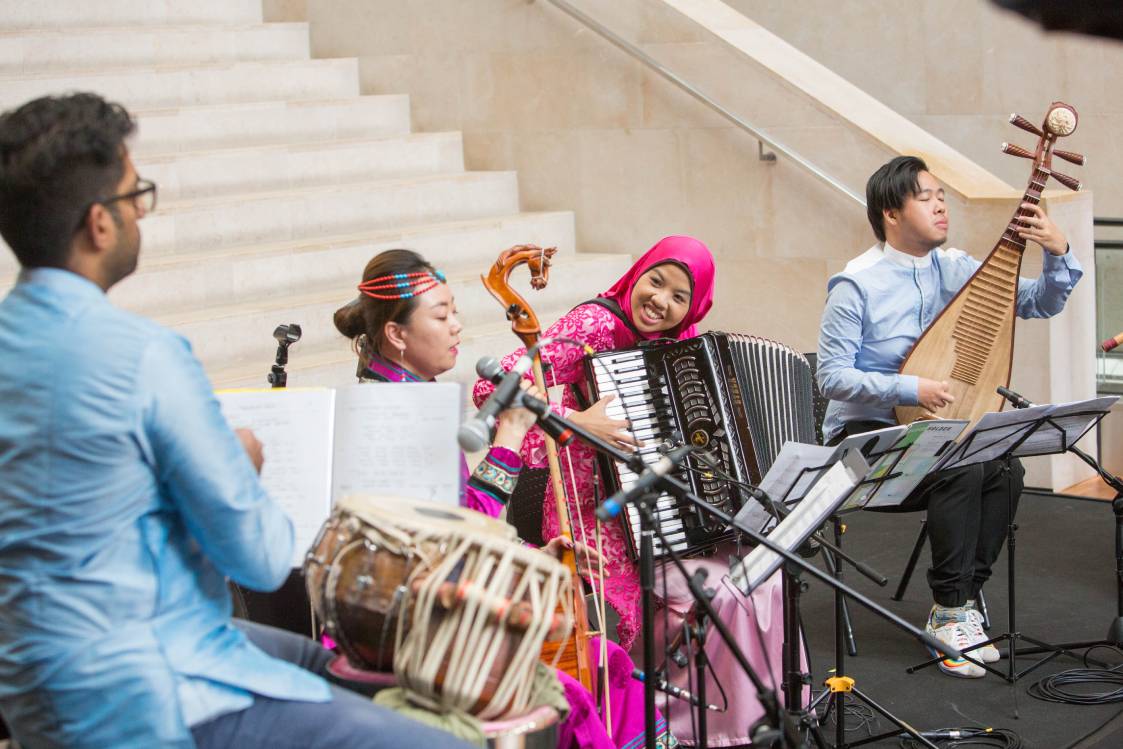 Syafiqah‘s journey has been a series of ups and downs. Even now, she sometimes feels pressure for having chosen an unconventional career path. She remembers one family gathering where a distant relative passed disparaging remarks on her career choice as a musician. “I felt so, so small, but their words fuelled me to push myself harder and be the best I can be,” recounts Syafiqah. “It is always a constant struggle.”

At 19, Syafiqah won a full scholarship to study music at the Yong Siew Toh Conservatory at the National University of Singapore. It was a high point, but she also developed a love-hate relationship with music during her time there. Syafiqah felt that many of her peers were more talented than her and questioned her own abilities. “I went through phases of self-doubt and I had moments where I wanted to quit my studies completely,” she recounts. “But I overcame them by holding onto my voice and stance as a musician with a unique message.”

Syafiqah persevered and eventually became the Conservatory‘s first Malay-Muslim Singaporean graduate. But whilst training in Western classic music, she also became increasingly aware that local traditional music was being neglected. “Malay music, for example, is not well-represented in Singapore and the world,” she said. “I asked myself, how could I change that?” SYAFIQAH SET OUT ON A PATH TO MAKE A DIFFERENCE. She taught herself the accordion, an instrument commonly used in Malay folk music, and joined Malay folk band Gendang Akustika. The group plays traditional Malay music and has performed at festivals and in venues including the Esplanade. Syafiqah also began arranging music that blended Asian and Western instruments for groups like the locally-renowned T‘ang Quartet and Singapore Wind Symphony. Shortly after, she started the fusion ensemble, Open Score Project with musician Gildon Choo.

Syafiqah’s journey has been one of finding her voice and confidence, with support from her parents and the community around her. In 2010, Syafiqah won a prestigious youth award by MENDAKI, which recognised Malay/Muslim youths who are role models in the community. Three years later, her percussion trio composition “Dance of the Merlions” won second prize in the Asian Composers League Young Composer Competition. Since then, Syafiqah has gone on to represent Singapore at several international music festivals around the world, at times helped along with grants from the National Arts Council (NAC). “I can push ahead because of the support I‘ve had and also the many sacrifices my parents made for me,” she said. “I feel empowered by this.”

Much of Syafiqah’s music incorporates elements of national identity and cultural heritage. Her work has gained more recognition, reflective of Singaporeans’ increasing engagement with the arts and heritage. Here’s a snapshot:

Between performing with the accordion and composing symphonies for music festivals, Syafiqah still finds the time to spread her love of music as a part-time teacher at School of the Arts Singapore (SOTA), where she also leads the school’s Malay Fusion Ensemble. “I find it really fulfilling,” she said. “I‘m imparting my skills in traditional and fusion music to a generation of younger musicians.”

THE STUDENTS STROLL QUIETLY INTO THE STUDIO. Syafiqah hands out the score for “Mak Inang Pulau Kampai”, a traditional folk song commonly played at Malay weddings. They whip out an assortment of instruments, among them a violin, a rabana – a hand drum used in Malay music – and an oud, a lute with Persian origins. Within minutes they begin playing from the score.

“Folk music has a lot of ornamentation, so don’t just follow the notes,” says Syafiqah, coaxing the students to be bold and improvise. “It‘s about being brave and being free.”

Some of her students, having been classically-trained, struggle to improvise to the unique style of folk music. Syafiqah patiently encourages them to try again. “This ensemble wouldn’t have survived this long if not for her confidence,” said Year 3 student Rayyan Rizdiun, who plays the rabana. “Without her, our self-esteem as musicians wouldn’t have grown.”

The students begin to get into the groove of the new piece. Some of them grow bolder and glance away from their scores. Others allow their fingers to wander as they add musical trills to their improvisation. Syafiqah looks on proudly as she accompanies them on her accordion. “It‘s always about the music,” said Syafiqah. “It means something to me and I believe it means something to others. That gives me the confidence to keep going.”