SINGAPORE: Singapore reported 2,396 new COVID-19 cases as of noon on Thursday (Nov 11) as eight more people died from complications due to the coronavirus.

The fatalities were aged between 74 and 100. All of them had various underlying medical conditions. The Ministry of Health (MOH) did not specify what these conditions were.

This brings Singapore’s death toll to 548. 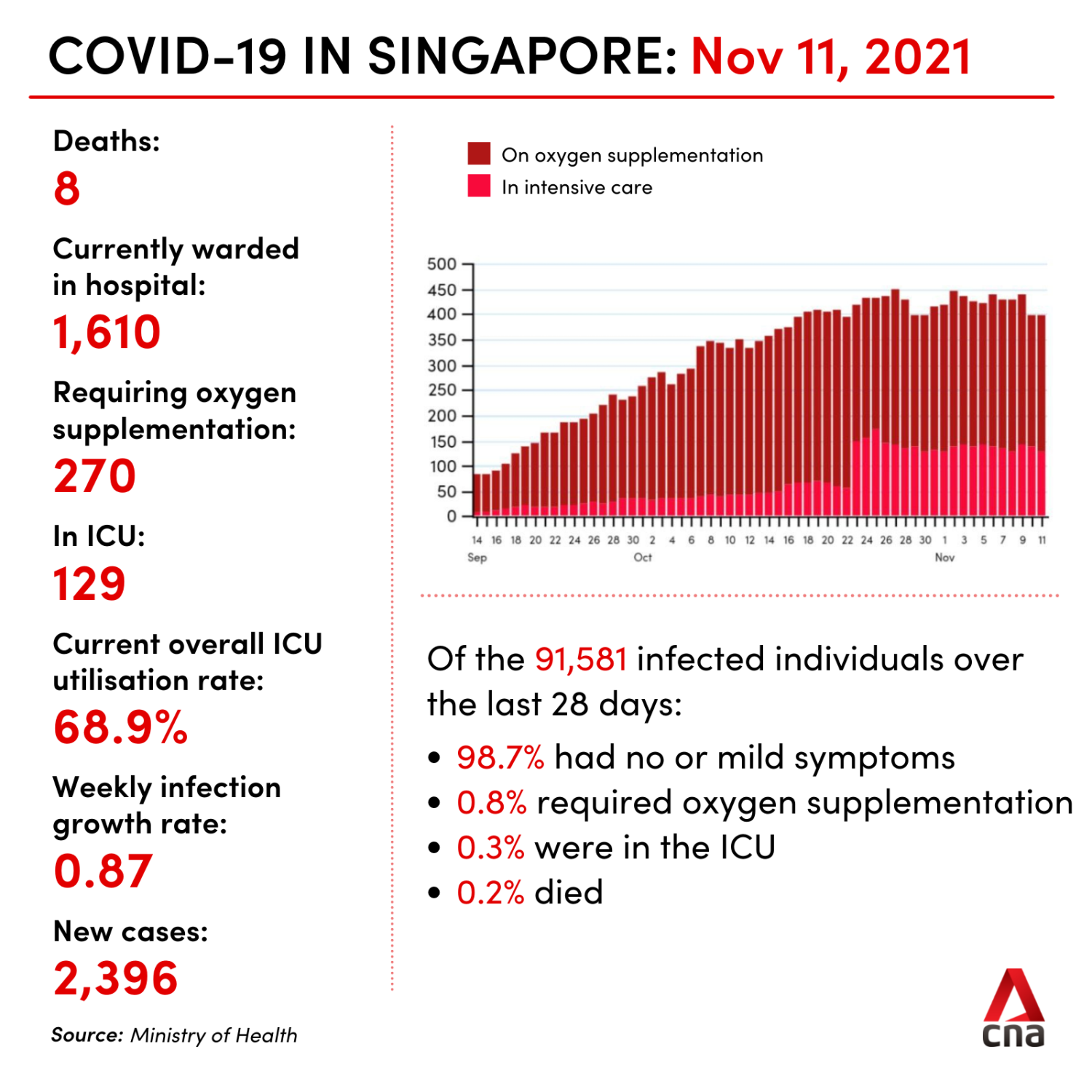 The weekly infection growth rate was 0.87 as of Thursday, a slight dip from the 0.88 reported on Wednesday. This refers to the ratio of community cases for the past week over the week before.

This was the ninth consecutive day that the weekly infection growth rate has remained below 1.

Of the new cases reported on Thursday, 2,379 infections were locally transmitted, comprising 2,243 cases in the community and 136 infections in migrant workers' dormitories.

There were 17 imported cases, MOH said in its daily update released to the media at about 10.55pm.

As of Thursday, Singapore has reported 230,077 COVID-19 cases since the start of the pandemic.

A total of 1,610 cases were warded in hospital, with 270 patients requiring oxygen supplementation in general wards.

Fifty-nine cases were unstable and under close monitoring in the intensive care unit (ICU), and 70 were critically ill and intubated. The current overall ICU utilisation rate was 68.9 per cent.

Of the 91,581 cases over the last 28 days, 98.7 per cent had mild symptoms or were asymptomatic, while 0.8 per cent required oxygen supplementation in the general ward, 0.3 per cent were in the ICU and 0.2 per cent died.

As of Wednesday, 85 per cent of Singapore’s population has completed their full regimen or received two doses of COVID-19 vaccines.

This includes the cluster at NTUC Health Senior Day Care (Taman Jurong), which reported three new cases to bring its total to 29. Among the cases were six staff members, 18 residents and five household contacts of cases.

The clusters at Acacia Home and Jenaris Home @ Pelangi Village added two cases each, expanding to 49 cases and 34 infections respectively.

Travellers from Singapore will now have to serve at least four days' quarantine in Denmark, after Singapore was recently removed from a European Union (EU) list of countries for which travel restrictions should be lifted.

In a Facebook post on Wednesday, the Embassy of Denmark in Singapore said Singapore was "now considered a high risk country for travel to Europe".

According to the post, with the exception of certain groups, such as Danish citizens "who are fully vaccinated regardless of where", all travellers from Singapore must be tested upon arrival and self-isolate for 10 days. If a negative polymerase chain reaction (PCR) test result is produced, the isolation will end on day four.

This applies to all travellers regardless of vaccination status as Denmark does not recognise Singapore's vaccination certificate.

Including Denmark, Singapore has VTL agreements with 12 countries, with South Korea to be added to the scheme on Nov 15.

Malaysia, Finland and Sweden will also be added to the scheme later this month.

Download our app or subscribe to our Telegram channel for the latest updates on the coronavirus pandemic: https://cna.asia/telegram