More cancer drug treatments to be subsidised, claims of up to S$9,600 under changes to MediShield Life

05:05 Min
More cancer patients will be subsidised for their outpatient drug treatment under changes to MediShield Life that will take effect in September next year. Sherlyn Seah reports.

SINGAPORE: More cancer patients will be subsidised for their outpatient drug treatment under changes to MediShield Life that will take effect in September next year.

These patients will be able to make claims of between S$200 and S$9,600 per month under a list that will cover 90 per cent of existing cancer drug treatments used in the public sector, the Ministry of Health (MOH) said on Tuesday (Aug 17).

An additional S$1,200 will be claimable for services such as scans, blood tests and doctor consultations per year.

Currently, eligible patients can claim up to S$3,000 per month under MediShield Life coverage.

The Government will also subsidise more cancer treatments and extend the Medication Assistance Fund to more Singaporeans by raising the eligible income criteria.

The changes follow recommendations made by the MediShield Life Council, which include creating a list of "clinically proven and cost-effective outpatient cancer drug treatments", said MOH. 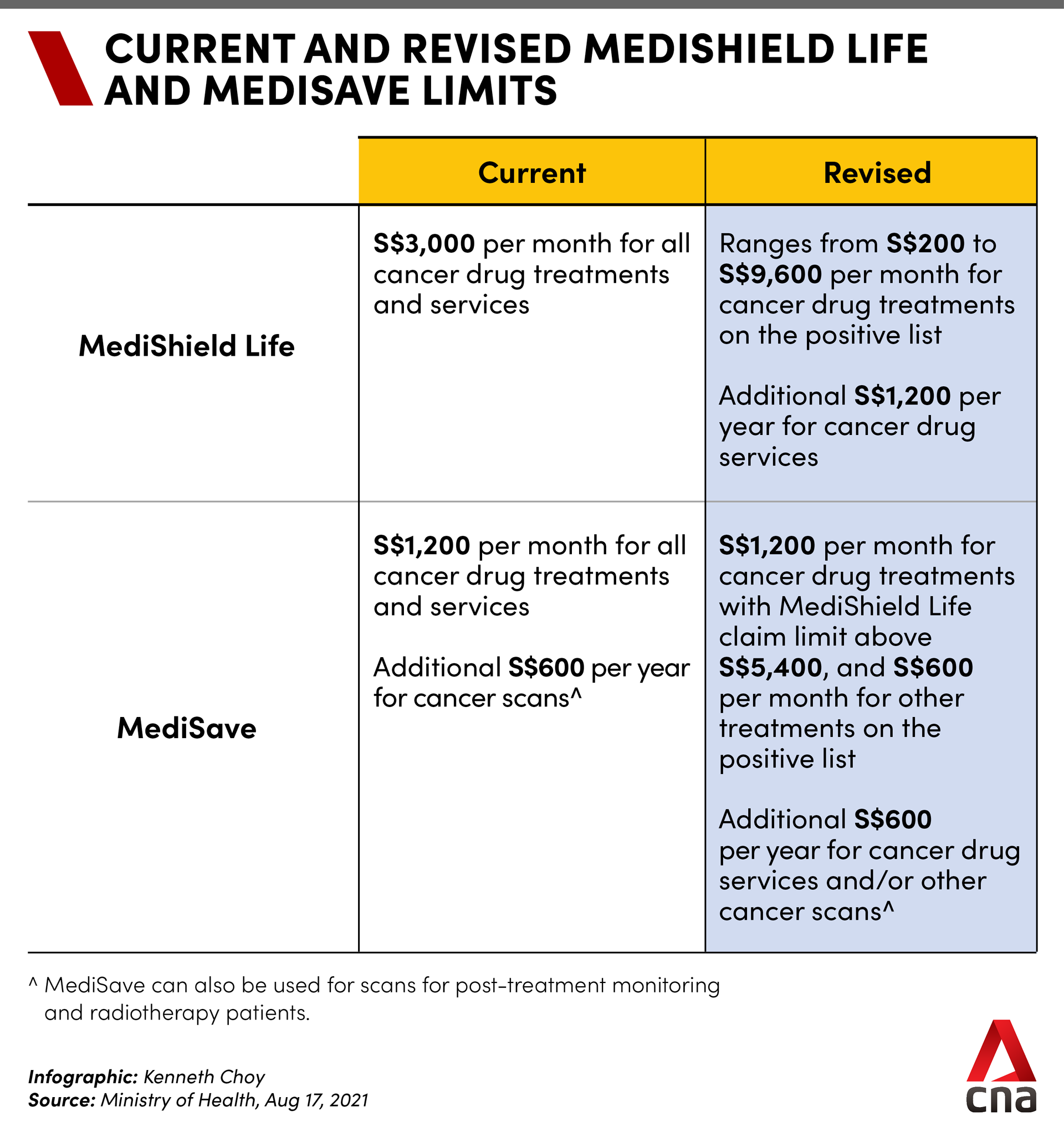 The Health Ministry said that these recommendations are in line with the approaches in other developed countries such as the United Kingdom,  Australia and South Korea.

The move “will support the procurement of cancer drugs at better prices and help to keep MediShield Life premiums sustainable,” a spokesperson said.

MediShield Life premiums may rise by up to 35% for some, higher claim limits proposed as part of review 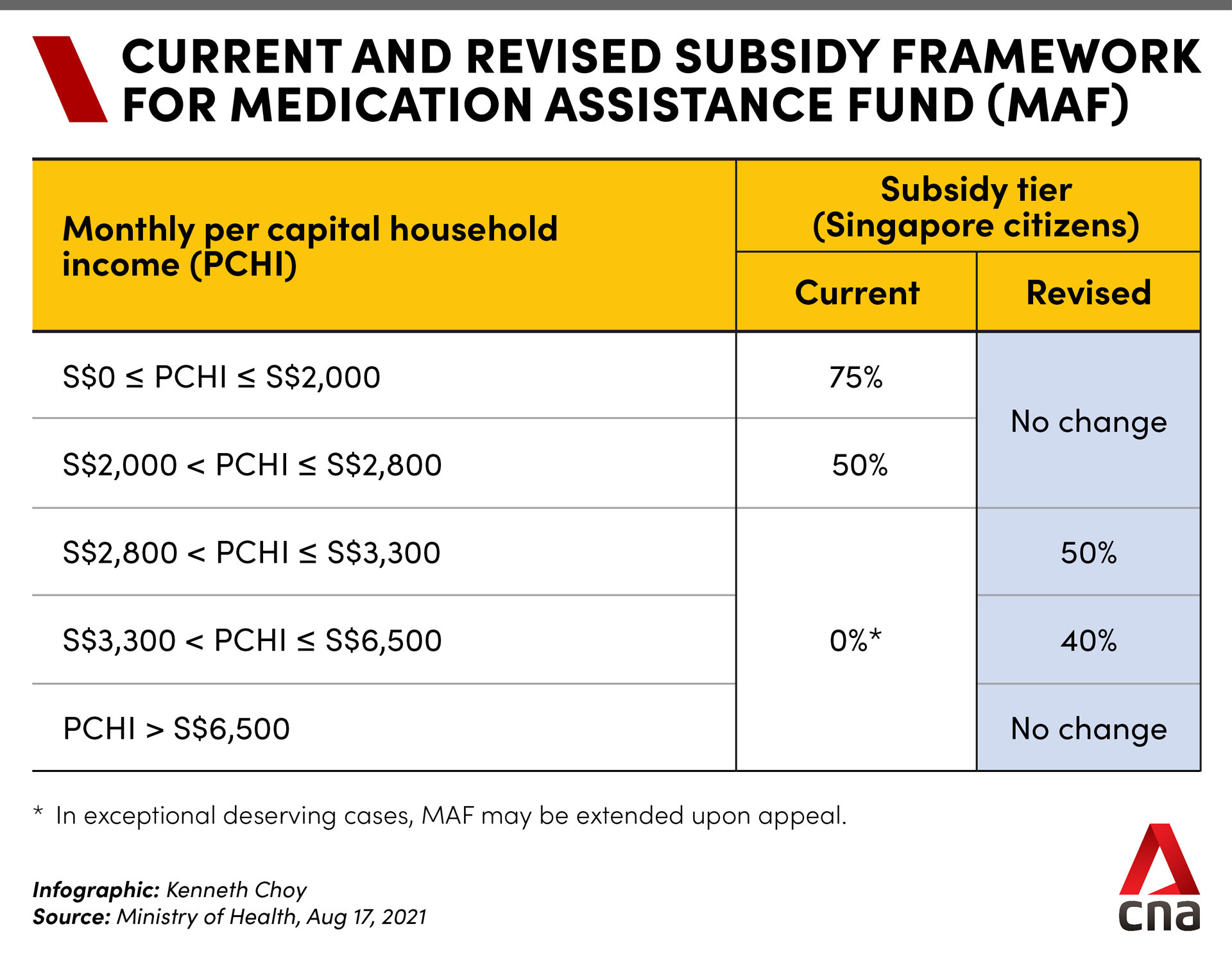 Subsidised patients in the public healthcare institutions currently receive up to 75 per cent subsidy for drugs under the Standard Drug List and Medication Assistance Fund.

“Following price negotiations with drug manufacturers to achieve better drug prices and cost-effectiveness, 55 more cancer drugs will be listed,” MOH said. This will increase support for around 150 cancer drug treatments, the ministry added. The new MediShield Life claim limits for cancer drug treatments will be set based on post-subsidy bills. 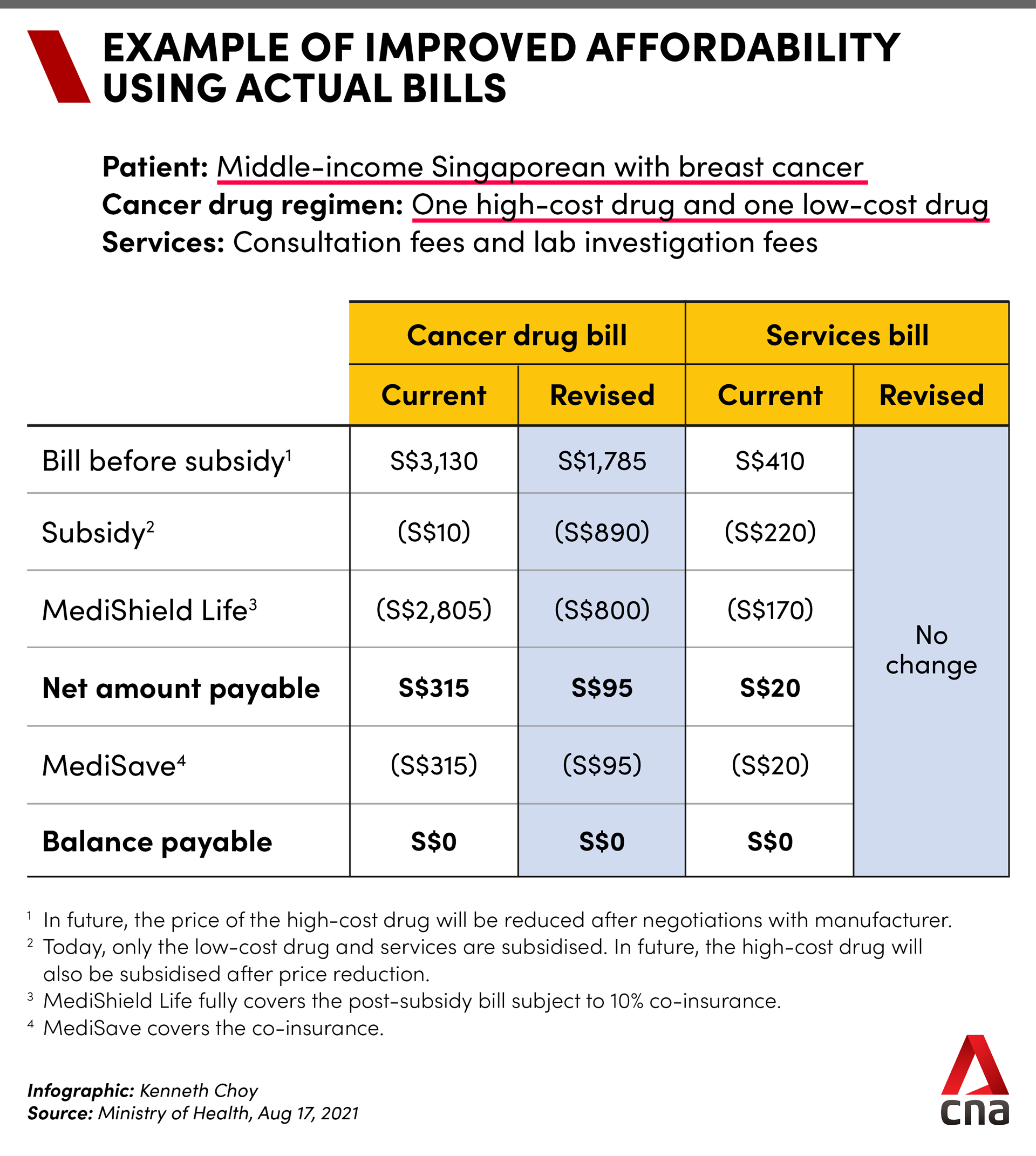 At the same time, the Government will extend the Medication Assistance Fund to Singaporeans with monthly per capita household income between S$2,800 and S$6,500, who currently do not get any subsidies. They will get subsidies of up to 50 per cent for cancer and non-cancer drugs.

Close to 90 per cent of subsidised Singaporean patients who use these treatments - compared to 70 per cent today - will have their cancer drug bills fully covered by subsidy and MediShield Life, subject to co-payment which can be paid using MediSave, MOH said.

The MediSave withdrawal limits for outpatient chemotherapy and outpatient cancer scans will be adjusted, said MOH. Patients will be able to claim S$1,200 per month under MediSave for cancer drug treatments with MediShield Life claim limit above S$5,400.

They will also be able to claim S$600 per month under MediSave for other treatments on the “positive list”, and an additional S$600 per year for cancer drug services and other cancer scans.

The "positive list" of treatments may include "those that are common today but are not registered with the Health Sciences Authority or are not cost-effective,” MOH said. The list will be updated every four months.

These treatments will be assigned a claim limit similar to their subsidised alternatives, the ministry said. Cost-effective means that that the drug treatments provide “good value compared to existing standard of care in terms of cost and health benefits”, and not that they are cheap, MOH clarified.

“Patients are strongly encouraged to discuss with their doctors on the use of available clinically proven and cost-effective treatments for their conditions,” MOH said.

The current claim limit of S$3,000 per month under MediShield Life for all outpatient cancer drug treatments and related services "has the unintended effect of raising cancer drug prices to maximise the claims”, MOH said.

“Prices for some of the commonly used cancer drugs can be 50 to 100 per cent higher in Singapore, and at current prices, most cancer drugs are not cost-effective, and they are therefore not subsidised today,” MOH said.

Explaining how this happens at a virtual media briefing, MOH said that drug companies have been reluctant to reduce their prices because of the S$3,000 limit.

“The (drug) company will say even though the drug is only worth S$200 I can charge you S$3,000 because that's what MediShield Life is willing to pay,” the ministry spokesperson said.

With the changes in design to MediShield Life however, “there is impetus for the drug companies to change their prices” so their drugs can be covered, the spokesperson added. 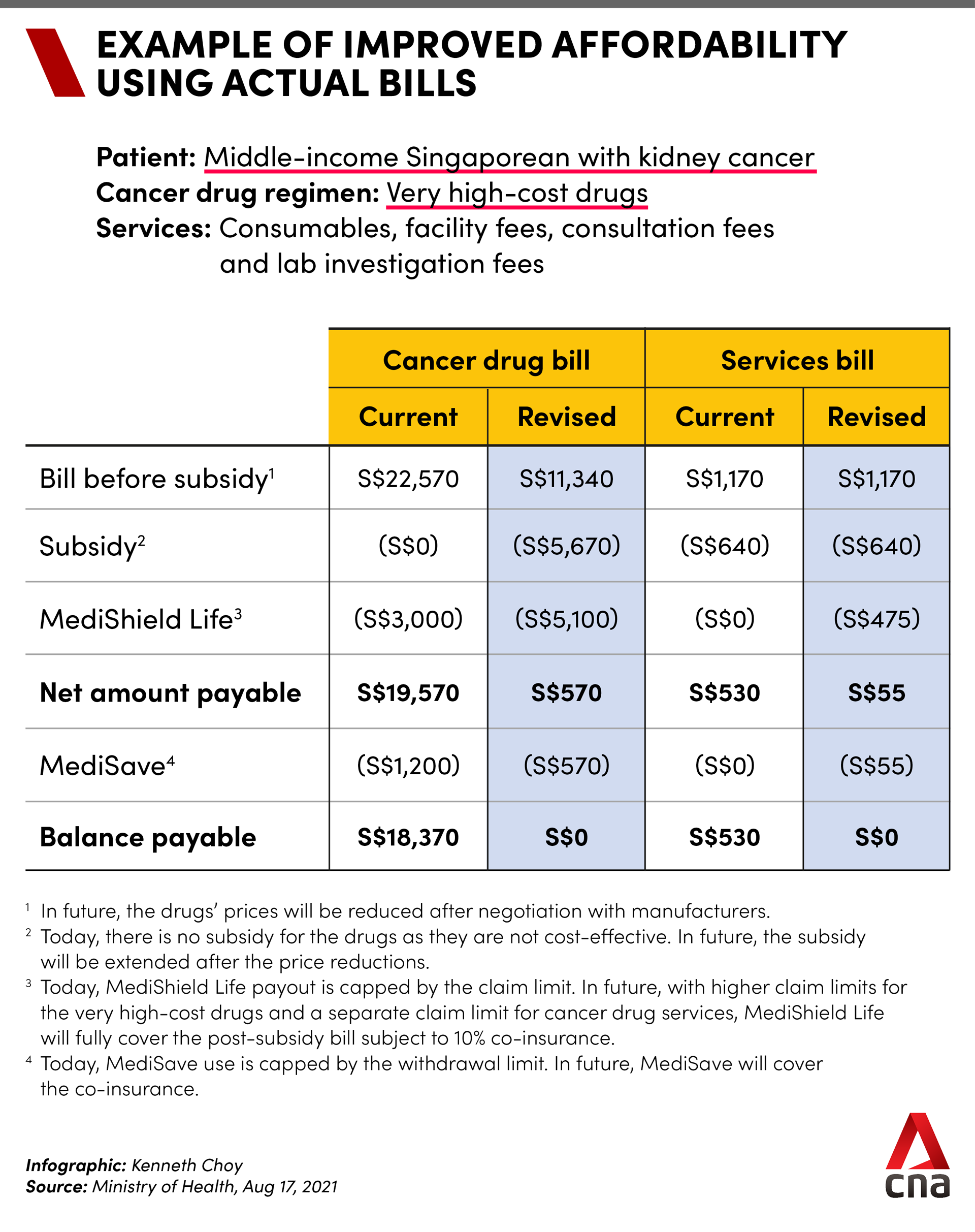 The ministry said that cancer drug prices have gone down by about 30 per cent on average.

It added that cancer drug spending is growing faster than spending for other drugs, fuelled by rising cancer prevalence and new, higher cost cancer drug treatments such as immunotherapies that could cost more than S$5,000 per month.

With the changes, there will be a “small proportion of patients” who will no longer be able to make claims or have a lower claim limit without subsidy, MOH said.

The one-year runway for the implementation of the changes is “for existing patients to complete their current course of treatment and adjust their treatment plans, where needed, to another treatment that is efficacious, cost-effective and eligible for MediShield Life claims and subsidies”, MOH said.

“These changes do not affect Integrated Shield Plan riders, which are paid for fully in cash,” MOH added.

The move will apply to all Integrated Shield Plans sold or renewed from April 2023 onwards.

“Together with the changes to MediShield Life and MediSave, these moves will help contribute to the affordability of cancer drug treatments and sustainability of premiums in the long run,” MOH said.