Mr Ranil Wickremesinghe has called for national unity. He has also pledged to alleviate people’s suffering and restructure the country’s debt.

COLOMBO: Sri Lanka is suffering from its worst economic crisis in recent history and, according to its president Ranil Wickremesinghe, the only way out is for the country to unite and face the challenge together.

The new government has a daunting task as it tries to formulate reform plans to revive the economy and stabilise the political situation.

Mr Wickremesinghe - a 73-year-old six-time prime minister who rose to the presidency with a majority vote in parliament last month - has taken on the challenge of rescuing a nation in turmoil.

“I took over a country that was in disaster. Severe economic crisis on one side, massive public opposition on the other,” the president said on Wednesday (Aug 3) in parliament, where he presented the government’s policy statement.

“However, I decided to accept this critical challenge, on behalf of my people and the country, based on the premise that it is my duty to light even one lamp for the country rather than cursing the darkness.”

His government is only beginning to outline a recovery plan for the nation, but there are no easy solutions when it comes to basic commodities shortage and debt restructuring.

Calls for political reforms and a new mandate from the people have compounded the challenges facing the new government.

The island nation of 22 million people is lacking foreign exchange reserves. There are not enough dollars in its coffers to pay for essential imports.

The economy is hamstrung by huge debts and skyrocketing inflation, which jumped to a record 60.8 per cent in July. The cost of living is soaring amid serious shortages of fuel, medicine and other essentials.

At petrol stations, queues usually stretch for several kilometres as people sometimes wait for days to fill their tanks.

Every day, hours of power cuts are imposed across the island as limited fuel interrupts power generation. “The immediate focus of the government is to try to reduce some of the scarcity of basic needs and (bringing down) inflation,” said Murtaza Jafferjee, economist and chairman of Colombo-based think tank Advocata Institute.

Data from the Department of Census and Statistics showed food inflation alone went up from 80.1 per cent in June to 90.9 per cent in July. Transport inflation, meanwhile, increased from 128 per cent to 143.6 per cent during the same period.

“This is destroying the lives of most people,” Mr Jafferjee said.

According to the president, the government has initiated the process of easing people’s suffering, from minimising power cuts to improving the supply of gas.

“There is no shortage of gas and soon, everyone would be able to obtain it without queuing. Safety measures have been taken to avoid food shortages. Bringing essential drugs and medical equipment to the hospitals have been initiated,” he told parliamentarians.

Commenting on the fuel shortage, Mr Wickremesinghe said it is timely to create a system where the commodity is imported using Sri Lanka’s export income and foreign remittances. However, he added that the supply “has to be curtailed”.

“These hardships would need to be borne until the end of this year,” the president said.

Fuel is currently distributed through a rationing system in Sri Lanka. The public is required to register their vehicles with the government to obtain a National Fuel Pass in the form of a specific QR code.

Each code comes with a weekly quota for fuel and the quantity differs according to the vehicle types.

Months of fuel shortage have disrupted various aspects of life in Sri Lanka and as the crisis unfolds, its people have become increasingly overwhelmed.

However, analysts believe the situation is slowly improving, thanks to dollar liquidity in the economy.

“In the month of July, it is expected that exports will exceed imports. This is a country that imports significantly more than it exports. But because of the demand compression due to the unaffordability and the lack of supply, (the) exports may exceed imports, significantly improving dollar liquidity in the banking system,” Mr Jafferjee told CNA.

According to the president, measures are being taken by the government to inject more dollars into the ailing economy through foreign remittances and tourism.

In Colombo, order has returned to the streets. But only a few weeks ago, angry protesters stormed the presidential palace and the ocean-front office, demanding the resignation of then-president Gotabaya Rajapaksa.

His resignation, submitted during his “private visit” to Singapore, paved the way for then prime minister Mr Wickremesinghe to take over the country’s top office and put Sri Lanka on the path to recovery.

Under Mr Wickremesinghe’s leadership, the Sri Lankan government has initiated negotiations with the International Monetary Fund (IMF) on a four-year programme for debt restructuring.

“We would continue those discussions from this month. It is our expectation to conclude the staff level negotiations expeditiously and successfully,” Mr Wickremesinghe said on Wednesday.

The government also plans to finalise the debt restructuring plan and submit it to the IMF “in the near future” as well as hold talks with countries providing loan assistance.

According to Mr Jafferjee, it may take several months before the IMF approves the programme and the expected funding would be in the range of about US$3 billion.

“It is not necessarily the money that the IMF gives us but it is the stability of an IMF programme that gives comfort for other multilateral lenders like the World Bank and the Asian Development Bank, plus other market actors who will then perhaps start reinvesting or re-lending to Sri Lanka,” he said. 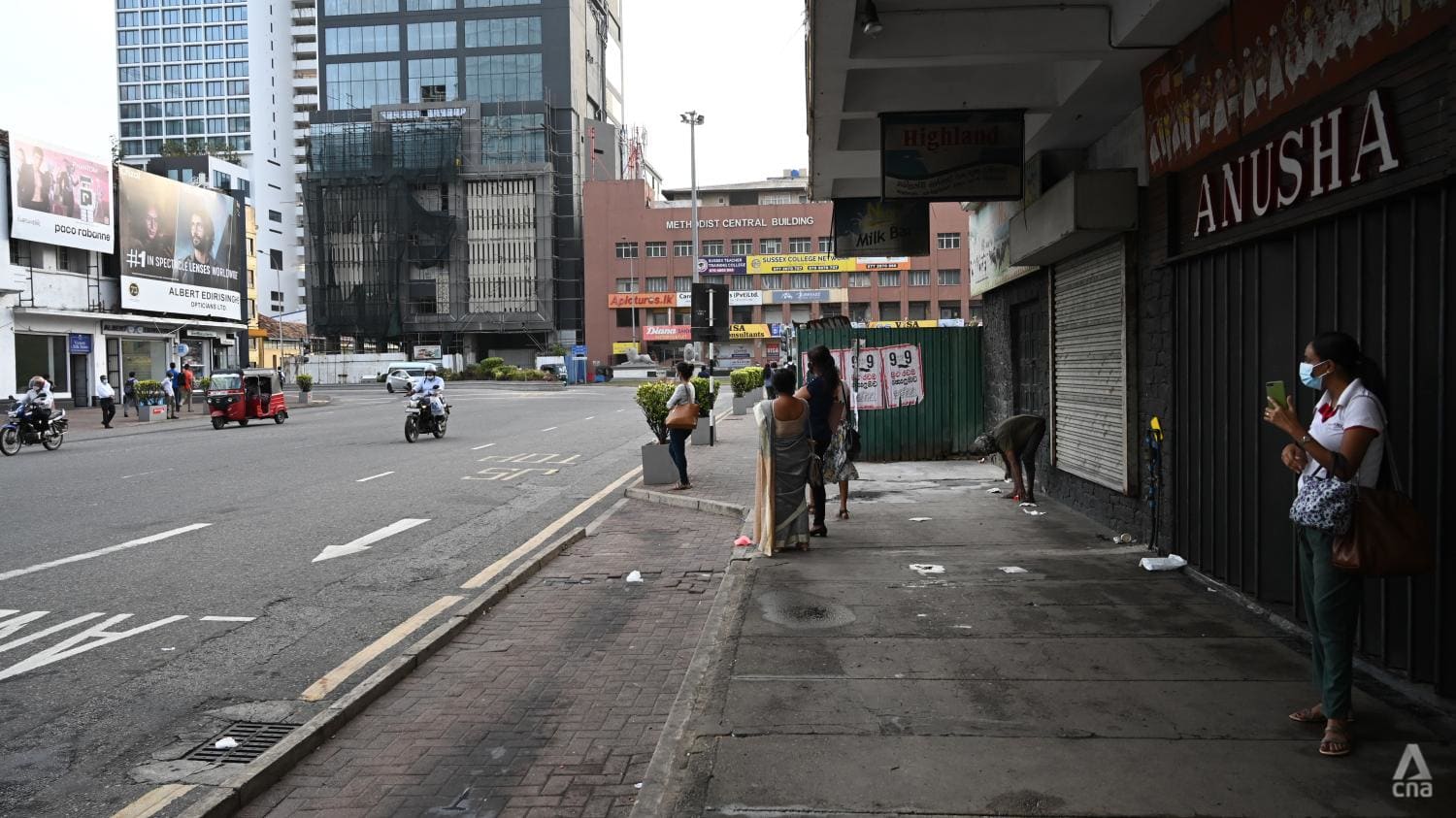 For Sri Lanka to survive the crisis, its president believes it needs unity.

In his statement to parliament on Wednesday, Mr Wickremesinghe said the country is in great danger and could only be saved from it if the people of Sri Lanka face this challenge together as one.

“Therefore, I once again request all parties representing the people in this parliament to unite in the formation of an all-party government. I respectfully extend the hand of friendship to all of you. I confidently invite you to put aside the past and come together for the sake of the country,” he said on Wednesday.

An all-party government will not act on the opinion of one party, he added. It comprises views of all parties within a common policy framework.

The olive branch was welcomed by opposition leader Sajith Premadasa. Speaking to journalists, he expressed hope that the president will realise the plans which have been laid out.

"We think positively about the content of the speech. We hope he will put it into practice," he said on Wednesday.

However, for the opposition bloc, some say that the so-called all-party government should have a time limit.

“It should be a one-year or six-month period and after that, we have to go for the elections and the people's mandate. Whoever gets the people’s mandate can form the government,” said opposition lawmaker Mohamed Mujibur Rahman from the Samagi Jana Balawegaya party.

The current government under Mr Wickremesinghe is widely seen as lacking the people’s mandate, given that the president did not come from an election by the people and that the Cabinet largely comprises parliamentarians with close ties to the former president.

“We need an election to sort out those issues.”

However, analysts believe it may be too soon to hold the polls.

“I'm not saying ‘dissolve the parliament today’ because that would be a huge disaster. We need to have a parliament so that we can come out of this (crisis) first,” said political analyst Dr Aruna Kulatunga, a former advisor to the Ministry of Primary Industries.

“Let's get everything done and then we go for a parliamentary election.”

Addressing parliament, Mr Wickremesinge acknowledged the demand of the public for political reforms and pledged to implement them during his tenure with political parties, youths and various organisations.

“Let us embark on a new journey with sincere hearts and noble expectations,” he said on Wednesday.

“Let us be a light to ourselves. Let us illuminate Sri Lanka with that light.”​​​​