National swimmer Amanda Lim wants to repay the community’s support of athletes like herself by lending a hand to those in need and enabling others to succeed.

Does Amanda’s story inspire you? Tell us why!

There is a saying that goes: “If you want to get something done, you’ve got to do it yourself”. For an example of someone who lives by that maxim, look no further than decorated national swimmer Amanda Lim. “I’ve always been quite self-driven since I was young, with clear ideas of what I want,” the 26-year-old says. “A quote I always live by is ‘If it is to be, it is up to me’.”

A multi-medal winner and current titleholder of ‘fastest woman in Southeast Asia’ — having triumphed in the 50m Freestyle event at the SEA Games five times in a row — Amanda attributes her self-motivation and discipline to her upbringing. She first took up swimming when she was six as therapy for her asthma. At age 10, she was going for training sessions every day at 5.30am. By the time she was 14, she was part of Singapore’s national swimming team. During those years, her homemaker mum would wake up every day in the wee hours of the morning to prepare breakfast, then shuttle Amanda between school, the pool and home. “When I saw just how much my mum did for me, it spurred me to take on more responsibility for myself and lessen her burden,” she says.

Soon, the teenager began taking charge of her life. She made major decisions on her own, such as choosing the Singapore Sports School over elite mainstream schools to better pursue her swimming aspirations. At the time, the Sports School had only just been set up and was considered an unconventional path to take in academia-focused Singapore. “My parents are pretty laid-back,” she says with a laugh. “Basically, I have to live with the consequences of my decisions. If something doesn’t work out, it’s up to me to figure out why.” LEVELLING THE FIELD OF PLAY

Yet, Amanda is also no stranger to disappointment. The darkest times of her swimming career were when she failed to qualify for the Olympic Games in 2012 and 2016. But those challenges also gave her lessons in confidence and mental grit. “I was just going through the motions every day without any purpose in life. I thought of hanging up my goggles, but I had to ask myself: Are you done? Or do you have unfinished business?” she says. She persevered, driven by the desire to better herself and improve her personal best timing in her pet event. Today, this elite athlete juggles a gruelling training regimen — think 4.45am starts and 10-times-a-week training — with a full-time job at Fullerton Health as an innovation associate. “I wanted to become a doctor but didn’t have time for both medical school and swim training,” says Amanda, who took a degree in Sports Science instead. “And now I’m in the healthcare sector, still trying to help one way or another.”

Though her job involves devising projects and spearheading welfare initiatives, Amanda’s first taste of community work came earlier. In 2016, she joined The Invisible Hands, a project started by her friends to provide the underprivileged in Singapore with basic necessities. She says: “When I saw how some families lived, it opened my eyes to a new level of poverty. There could be 10 people crammed into a one-room flat. It got me thinking. Through swimming, I have been gifted with access to sponsors like NTUC FairPrice and Milo. So I should do something to give back to the community.”

Thus inspired to make a change in the community, she started Team Heartwork (see box story) with five other young national athletes. “As athletes, we want to give back because of what is invested in us — the community support we get every time we race on home ground,” says Amanda. “We understand that our accomplishments would not have been possible otherwise. Having benefited from the community, we wish to help Singaporeans from all walks of life have an equal shot too.” Team Heartwork also acts as a bridge between those who need help and those who want to help, allowing different generations to work together. “We know there are a lot of young people out there who want to lend a hand but don’t know how to. Hopefully, we can be a focal point and create a pathway for them to kickstart their own programmes,” she says.

Through Team Heartwork and her earlier volunteer work at senior activity centres, she has also become aware of and sympathetic to the needs of the elderly. “Many either don’t know how to get to a polyclinic or cannot get there because they’re immobile. Some are so isolated; nobody cares about them. I thought that as someone who has a voice in the community, I could be of help, even if it is in little ways,” she says. “I want to cultivate the mindset of active ageing and give back to the community, using the knowledge and experience I’ve gained from university and competitive swimming.”

Amanda also hopes to use her position as an athlete and her passion for the community to spread the message about the importance of living well. She regularly conducts swim clinics, organised by the Singapore Swimming Association. After more than a decade of competitive swimming, she wants to pass down her skills in the hopes of grooming the next generation of Singapore national swimmers. Since she began holding these clinics in 2017, she has taught more than 200 children. She says: “I hope that through sports, people can learn to live their lives to the fullest, to understand sports is for everybody to participate in and have fun.” She speaks from experience when she says youth who are chasing their dreams must be brave in taking the first step. “It goes back to my motto — if you want something, you need to make it happen and pave the path for your own future. Failure is just another stepping stone on the learning curve towards your goal.” ALL ABOUT TEAM HEARTWORK

Last year, Amanda Lim started an initiative called Team Heartwork with world champion bowler Shayna Ng; Paralympic medallists Theresa Goh and Yip Pin Xiu; and canoeist siblings Sarah and Stephanie Chen. Their goal is to use their sporting connections to help the community in any way possible, from gathering food donations and volunteering time for the needy to cleaning up the environment. Team Heartwork’s first venture was helping Fullerton Health’s Project Big Heart, which provides free medical services and life-long medication for chronic diseases to patients from underprivileged communities. Amanda was in charge of planning the event this year and roped in the Heartwork team for the orthopaedic and physiotherapy specialist segments, where they assisted in translation, logistics and ushering. 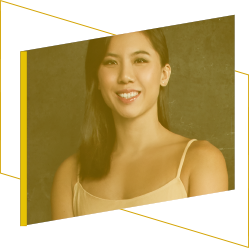 Does Amanda’s story inspire you?
Tell us why!